From Our "Does It Get Any Weirder than This?" Department

Washington (CNN) -- The Department of Defense recently purchased and destroyed thousands of copies of an Army Reserve officer's memoir in an effort to safeguard state secrets, a spokeswoman for Obama's White House said Sept. 25.

"DoD decided to purchase copies of the first printing because they [sic] contained information which could cause damage to national security," Pentagon spokeswoman Lt. Col. April Cunningham said.

In a statement to CNN, Cunningham said defense officials observed the September 20 destruction of about 9,500 copies of Army Reserve Lt. Col. Anthony Shaffer's new memoir, "Operation Dark Heart."  The cost to taxpayers for the action is estimated at nearly $50,000.

Shaffer says he was notified the day before about the Pentagon's purchase.

"The whole premise smacks of retaliation," Shaffer told CNN following White House admissions. "Someone buying 10,000 books to suppress a story in this digital age is ludicrous."  Even more so, apparently, when an unknown and unspecified number of digital copies are still circulating as eBooks.

"I followed my instructions from the Department of the Army to the letter," Shaffer said.  "I even warned DOD that their destruction of these books would only create more demand and increase readership."

Shaffer's publisher, St. Martin's Press, released a second printing of the book that it said had incorporated some changes the government had sought "while redacting other text he (Shaffer) was told was classified."

From single words and names to entire paragraphs--"Even hyphens in hyphenated words," Shaffer said--blacked out lines appear throughout the book's 299 pages.

CNN obtained a memo from the Defense Intelligence Agency dated August 6 in which Lt. Gen. Ronald Burgess claims the DIA tried for nearly two months to get a copy of the manuscript. Burgess said the DIA's investigation "identified significant classified information, the release of which I have determined could reasonably be expected to cause serious damage to national security."

Shaffer's lawyer, Mark Zaid, said earlier this month that the book had been reviewed by Shaffer's military superiors prior to publication.

"There was a green light from the Army Reserve Command," Zaid told CNN.

But intelligence agencies apparently raised objections when they received copies of the book.
CNN 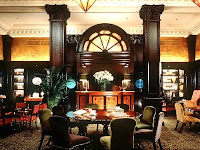 The Algonquin Hotel, the hotel where literary figures of the 1920s held court at the fabled centerpiece Round Table, is becoming a Marriott.  The storied landmark at 59 W. 44th St. will become another link in the giant hotel chain this week as the first New York City property in the sprawling Marriott Autograph Collection, according to a Crain's New York Business report.


The 174-room hotel, which opened in 1902, was designated as a city landmark three years ago for its historic relevance as a gathering place for some of the country's most literary notables, including columnist Robert Benchley, New Yorker publisher Harold Ross, and quick-witted authoress Dorothy Parker (Men Don't Make Passes at / Girls Who Wear Glasses).  The management maintained a steadfast tradition as a comforting haven for artists, even in the face of such guest complaints as lost sleep during Alan Jay Lerner and Frederick Loewe's work on their musical, My Fair Lady.

It likely won't be the only storied New York City hotel to sail under the Marriott Autograph flag.  "We are actively looking for other New York hotels to add to the collection," a Marriott International spokeswoman told Crain's.

In Death There Is, What? Publishing?

Little, Brown & Co. recently revealed the cover jacket for The Pale King, an unfinished novel by David Foster Wallace due for publication next year.  In a PR release, the publisher said the novel, whose cover design was created by Mr. Wallace’s widow, Karen Green, takes place in “an IRS tax-return-processing center in Illinois in the mid-1980s.”  It tells the story of “a crew of entry-level processors and their attempts to do their job in the face of soul-crushing tedium.”

I don't know about you, but I'm going to rush right out and get in my pre-order.

Michael Pietsch, the publisher of Little, Brown and the editor of the novel, added that the author “takes agonizing daily events like standing in lines, traffic jams, and horrific bus rides — things we all hate — and turns them into moments of laughter and understanding.

“Although David did not finish the novel, it is a surprisingly whole and satisfying reading experience that showcases his extraordinary imaginative talents and his mixing of comedy and deep sadness in scenes from daily life.”

Did I say rush right out?  I'm jetting to my nearest bookstore.

Little, Brown said it will release the book on – when else? – April 15.

All of which makes us wonder: is there publishing after death?  Or simply corporate greed?